Cherry Creek Theatre (CCT) announced its cast for its final 2018 production, My Name is Asher Lev, opening October 18 at the Pluss Theatre in the Mizel Arts & Culture Center. Newcomer Josue Ivan Prieto makes his Denver debut in the title role of the Hasidic artist. Originally from Aurora, Colo., Prieto is a current student at the University of Northern Colorado, pursuing his Bachelor of Fine Arts in Acting.

“Josue brought a compelling combination of raw energy and emotional maturity,” said returning CCT director Bernie Cardell. “I am really jazzed to introduce him to Denver audiences because they will definitely be seeing him again and again.” Cardell is a two-time Henry Award-nominee (Vintage Theatre’s Avenue Q, Rabbit Hole).

Written by Aaron Posner, the award-winning stage adaptation of Chaim Potok’s acclaimed novel follows Asher Lev, an artist caught between two worlds. Relationships with his parents, community, and mentor are all on the line as the prodigy must make a difficult choice between art and faith.

Tickets start at $30 and are available by calling the box office at 303-800-6578 or visiting cherrycreektheatre.org.

My Name is Asher Lev Christy is thrilled to be making her Cherry Creek Theatre debut in My Name is Asher Lev. She most recently played Grace in Leap at the Denver Center for the… Josh is thrilled to be able to perform at the Cherry Creek Theatre for the third time! His experiences in both The Baby Dance and Beau Jest were ones that… 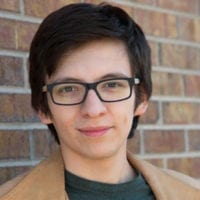 Josue Ivan is in his last year of his Bachelor of Fine Arts degree in Acting at the University of Northern Colorado. Josue recently has worked in a variety of…