All’s fair in art and war

Paris, 1941. German occupation forces have dragged Pablo Picasso from his favorite café into a dark basement storage vault. The Third Reich’s cultural attaché, Miss Fischer, interrogates the cubist master to verify three of the master’s works for the Ministry of Propaganda’s “degenerate” art exhibition. Through their thrilling power play, truths are revealed, and tensions rise when art, politics, sex and lies collide.

I still have goosebumps thinking about it.

Billie is very pleased to be back at Cherry Creek Theatre where she previously directed Vigil and performed in Driving Miss Daisy and 4000 Miles. Billie spent 20 years in… Logan is thrilled to part of this production of A Picasso, his first at Cherry Creek Theatre. Logan has worked at Creede Repertory Theatre for 11 seasons where some of…

Susie is thrilled to be back onstage at Cherry Creek Theatre where you may have seen her last in Sondheim on Sondheim. Other productions in the Denver area include Nine,… 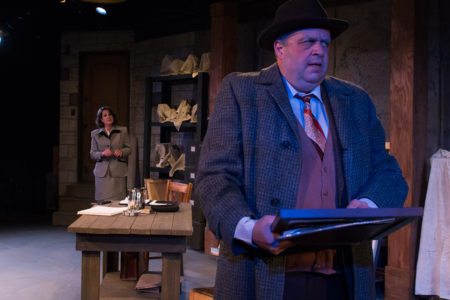